It is with great sadness that we learn of the death of Dr Donald Hunt, OBE.  He was the founder of The Elgar Chorale of Worcester, as The Donald Hunt Singers, and first Director of Music. Donald was from Gloucester and had been a chorister at Gloucester Cathedral.  From the age of 13 he studied the organ under Herbert Sumsion, Gloucester Cathedral Organist and became his assistant at when he was 17 years old.  Moving to Leeds he conducted the Halifax Choral Society and was Organist and Choirmaster at Leeds Parish Church from 1957.  He received a Doctorate honoris causa from Leeds University in 1975.

In 1976 he became the Director of Music and Master of the Choristers at Worcester Cathedral starting a long and fruitful association with the Faithful City.  While at the Cathedral, Donald founded the Donald Hunt Singers in 1980 which became The Elgar Chorale of Worcester. Known for his knowledge of Elgar and his music, in 1996, he became the Principal of the Elgar School of Music. When he retired from the school in 2007, he continued to lecture on Elgar and his music amongst other subjects.  Following a Gala Concert in the Cathedral of Elgar’s The Music Makers, in 2014, Donald retired as Director of Music of the Elgar Chorale.  Elected Emeritus Director of Music, Donald retained his connection with the Chorale.

He died on Saturday, 4th August while listening to a recording of himself playing Sumsion on the Worcester Cathedral organ.  Our heartfelt condolences to Jo and his family. He will be sorely missed but his music-making will remain with us. 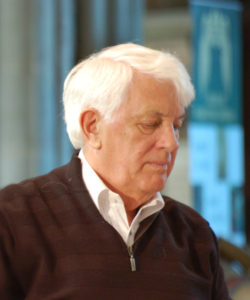 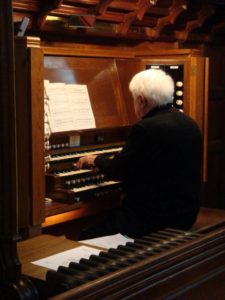 And so, on to our next performance..If you enjoyed our concert at the Elgar Festival , come and hear us on 13th November in St Martin's, London Road. Rutter Requiem and Piers Maxim De Profundis among the pieces on a very exciting programme. www.eventbrite.co.uk/e/rutter-requiem-tickets-177126890297Michael Whitefoot Photography ... See MoreSee Less

Elgar Chorale: a leading chamber choir in the West Midlands of about 40 singers based in Worcester. Busy & varied programme of concerts round Worcestershire
View on Facebook
· Share

We use cookies on our website to give you the most relevant experience by remembering your preferences and repeat visits. By clicking “Accept All”, you consent to the use of ALL the cookies. However, you may visit "Cookie Settings" to provide a controlled consent. You can read our full privacy policy here: Read More
Cookie SettingsAccept All
Manage consent

This website uses cookies to improve your experience while you navigate through the website. Out of these, the cookies that are categorized as necessary are stored on your browser as they are essential for the working of basic functionalities of the website. We also use third-party cookies that help us analyze and understand how you use this website. These cookies will be stored in your browser only with your consent. You also have the option to opt-out of these cookies. But opting out of some of these cookies may affect your browsing experience.
Necessary Always Enabled
Necessary cookies are absolutely essential for the website to function properly. These cookies ensure basic functionalities and security features of the website, anonymously.
Functional
Functional cookies help to perform certain functionalities like sharing the content of the website on social media platforms, collect feedbacks, and other third-party features.
Performance
Performance cookies are used to understand and analyze the key performance indexes of the website which helps in delivering a better user experience for the visitors.
Analytics
Analytical cookies are used to understand how visitors interact with the website. These cookies help provide information on metrics the number of visitors, bounce rate, traffic source, etc.
Advertisement
Advertisement cookies are used to provide visitors with relevant ads and marketing campaigns. These cookies track visitors across websites and collect information to provide customized ads.
Others
Other uncategorized cookies are those that are being analyzed and have not been classified into a category as yet.
SAVE & ACCEPT