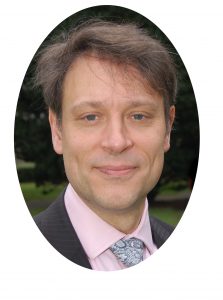 Piers was appointed Director of Music of the Elgar Chorale in January 2015. Working with many choirs as conductor, assistant conductor and chorus master, during his career, while singing, organ playing, composing and teaching are a large part of his life too.

Piers began his musical career singing – as a boy chorister at St Paul’s Cathedral, London. An organist since his teens, he was Organ Scholar at his school, Christ’s Hospital. He continued to play during his time at Wells Cathedral and as a Choral Scholar at Clare College, Cambridge. After graduating, he continued his studies at the Guildhall School of Music and Drama, London.

In the field of opera, Piers has worked in European opera houses including Staatsoper Berlin, Le Théâtre des Champs Elysées Paris, and the Netherlands Nationale Reisopera. Chorus Master from 2002 to 2004 at Scottish Opera, Piers conducted La Bohème (Puccini) and Aida (Verdi). From September 2004 until 2009, he was Chorus Master at Le Théâtre Royal de La Monnaie in Brussels. There he worked on around 40 operas on stage and in concert.

From 1996 to 2012 Piers Maxim was Assistant Conductor to René Jacobs and worked on many Handel operas and oratorios. Piers made his USA debut conducting Die Zauberflöte (Mozart) in New York in April 2007. This same production toured South Africa in September 2007, where Piers received glowing critiques. In October 2010 Piers conducted the first performance of a staged baroque opera in China – Handel’s Semele.

Piers has conducted  much of the choral repertoire while leading several choirs in England – Messiah and Saul (Handel), Mass in B minor (Bach), Mass in C minor (Mozart), The Dream of Gerontius (Elgar), Sea Symphony (Vaughan Williams), A Child of our Time (Tippett), to name but a few. 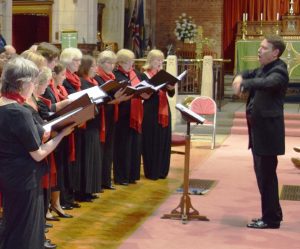 as been composing music since he was 7 years old, having songs, carols and piano works published while at school. One of his composition highlights, And I said to the Man, sung at a millennium eve service of celebration at Southwark Cathedral, was in the presence of HM Queen Elizabeth II. In 2011 he was joint winner of the Longfellow Chorus Cantata Composition Competition in the USA. His oratorio The Musket Ball premiered in Greenwich, London, in March 2016. Piers composes and arranges many songs for the choirs he directs. He has recently compiled and co-edited an upper voices resource for the Royal School of Church Music – All Glorious Above – which includes many of his compositions.

Piers is currently Organist and Director of Music of Malvern Priory and Conductor of EC4 Orchestra based in London. He teaches piano and singing at schools in Worcestershire and Herefordshire.

And so, on to our next performance..If you enjoyed our concert at the Elgar Festival , come and hear us on 13th November in St Martin's, London Road. Rutter Requiem and Piers Maxim De Profundis among the pieces on a very exciting programme. www.eventbrite.co.uk/e/rutter-requiem-tickets-177126890297Michael Whitefoot Photography ... See MoreSee Less

Elgar Chorale: a leading chamber choir in the West Midlands of about 40 singers based in Worcester. Busy & varied programme of concerts round Worcestershire
View on Facebook
· Share

We use cookies on our website to give you the most relevant experience by remembering your preferences and repeat visits. By clicking “Accept All”, you consent to the use of ALL the cookies. However, you may visit "Cookie Settings" to provide a controlled consent. You can read our full privacy policy here: Read More
Cookie SettingsAccept All
Manage consent

This website uses cookies to improve your experience while you navigate through the website. Out of these, the cookies that are categorized as necessary are stored on your browser as they are essential for the working of basic functionalities of the website. We also use third-party cookies that help us analyze and understand how you use this website. These cookies will be stored in your browser only with your consent. You also have the option to opt-out of these cookies. But opting out of some of these cookies may affect your browsing experience.
Necessary Always Enabled
Necessary cookies are absolutely essential for the website to function properly. These cookies ensure basic functionalities and security features of the website, anonymously.
Functional
Functional cookies help to perform certain functionalities like sharing the content of the website on social media platforms, collect feedbacks, and other third-party features.
Performance
Performance cookies are used to understand and analyze the key performance indexes of the website which helps in delivering a better user experience for the visitors.
Analytics
Analytical cookies are used to understand how visitors interact with the website. These cookies help provide information on metrics the number of visitors, bounce rate, traffic source, etc.
Advertisement
Advertisement cookies are used to provide visitors with relevant ads and marketing campaigns. These cookies track visitors across websites and collect information to provide customized ads.
Others
Other uncategorized cookies are those that are being analyzed and have not been classified into a category as yet.
SAVE & ACCEPT