“A Baroque Christmas Concert by Candlelight”

Join the Elgar Chorale of Worcester in the beautiful surroundings of the Church of the Ascension, Malvern Link, for a seasonal feast of Baroque Christmas music lit by candlelight.

With music from Johann Walter (1496-1570) at the end of the renaissance, through Heinrich Schütz (1585-1672), to Johann Sebastian Bach (1685-1750), perhaps the greatest proponent of the genre, this concert has examples of Christmas music throughout the baroque period. 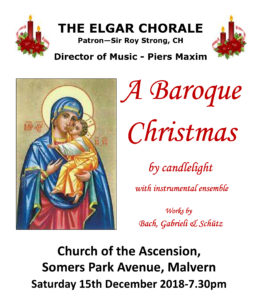 As well as all this beautiful and inspiring music, there will be a glass of “Glühwein” the German version of mulled wine and a mince pie during the interval!

For followers of the Chorale (remember our “Glories of Renaissance Polyphony” concert here in 2016?) and for those new to us, this Christmas Concert will be a treat!  Tickets at £15 (£5 for students) to include the Glühwein and mince pie, are available on-line by clicking here or by calling 01684 594570

Today, the Elgar Chorale will be singing to a live audience at the 3 Choirs Festival for the first time in.........Can't wait to be performing again! @3choirsfestival ... See MoreSee Less

Only 3 days to go until our concert at @3choirsfestival . Can't wait to be perform again in front of a live audience. #Elgar #3choirsfestival @worcesternews ... See MoreSee Less